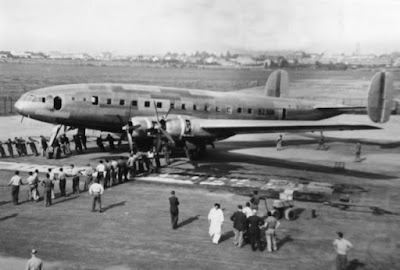 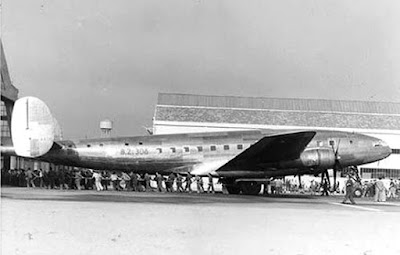 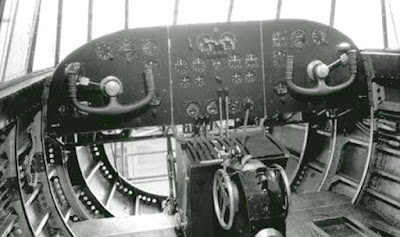 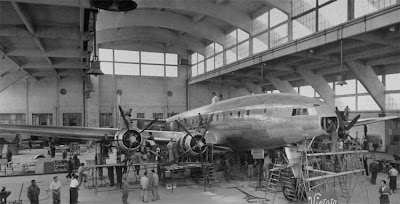 I must say I have never seen or heard of this rare beast before until recently.  The Breda-Zappata B.Z.308 was an Italian airliner produced by Breda. The aircraft designer Filippo Zappata developed a four-engined civil transport for operation over both European and transatlantic routes.

Construction of the Breda-Zappata B.Z.308 was started during 1946 at Breda's Sesto San Giovanni works. The allied control commission halted the work, which was not resumed until January 1947. Further delays in the delivery of Bristol Centaurus engines delayed the first flight, which was on the 27th August 1948, piloted by Mario Stoppani. The B.Z.308 was a large low-wing monoplane of all-metal construction; the fuselage had an oval cross-section. It had a large tailplane with endplate fins and rudders, retractable landing gear. Powered by four Bristol Centaurus radial engines driving five-bladed propellers. It was designed for a flight crew of five, and 55 passengers in two cabins, a high-density model was planned with seats for 80. Although flight testing went well, financial problems and the realization that competition from American-built airliners would take a major share of the post-war airliner market, along with the pressures to close down the Aeronautical section of the Breda industries as requested by the Marshall plan, led to the project being abandoned. Breda stopped producing airplanes subsequently. Despite orders in 1950 from India, Argentina and Persia, only the prototype was built, allegedly also due to pressure from the allies for Italy to refrain from competing in civilian aircraft manufacture after the war.

The single aircraft ended up with the Italian Air Force in 1950. Itwas used to fly between Rome and Mogadishu until one day, following damage during a poor landing, it was abandoned in a field in Somalia before being broken up in 1954. It was also the first Italian transatlantic aircraft, and the first aircraft to fly into the new Malpensa airport in 1948.
Wikipedia

Posted by The Aviation Anorak at 20:13 No comments:

Designed as a lightweight anti-submarine aircraft. The Short Seamew first flew on August 23rd 1953.  It flew as badly as it looked. Only 19 were built before they binned the project. 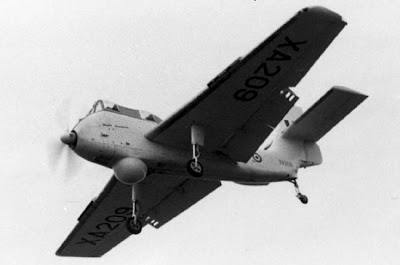 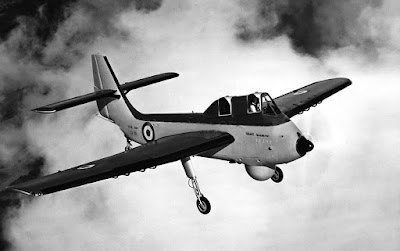 http://en.wikipedia.org/wiki/Short_Seamew
Posted by The Aviation Anorak at 19:18 No comments:

While the first Nene-Lancastrian
can be dubbed 'the world's first jet airliner' only in that in 1946 it took passengers for rides in an uncanny near-silence, and with a total lack of the vibration to which airline travellers were then used (with its surplus piston engines switched off). It could not really be called an airliner at all but only an engine testbed. The Nene-Viking was a different proposition. It has also been called 'the first jet airliner' but with much more justification.

It was a true airliner, designed from the start as a civil transport and in its normal form, powered by piston engines. At an early stage in the programme the Ministry of Supply, then the government procurement agency for aircraft, decided to order one Viking with turbojets instead of the usual Hercules sleeve-valve radial piston engines. This was partly in order to assist general development of jet airliners, and see what problems might arise, and partly to furnish ministers and officials with a comfortable executive transport.
The 107th airframe on the Weybridge production line was set aside, and the designers schemed a series of major changes. The existing nacelles were replaced by completely new jet pods each housing a Rolls-Royce Nene, with the trailing edge of the wing extended at the rear to fair smoothly into the top of the pod. The Vickers main landing gears were of a totally new type, designed only for this aircraft, with four separate short legs each carrying a wheel which retracted to lie on each side of the jet pipe inside the nacelle. Unlike other Vikings
the elevators were skinned with metal, and the metal skin on the wings and tailplane was made thicker than normal. There were also changes to the cockpit, fuel system and other items.

Chief test pilot J 'Mutt' Summers flew the Type 618 Nene-Viking from Wisley on April 6, 1948. At different times it bore civil registration G-AJPH and Ministry serial VX856. On the 39th anniversary of Bleriot's crossing of the Channel, on July 25, 1948, the Nene-Viking loaded with passengers (24 was the usual maximum) at London Heathrow and flew them in great comfort to Villacoublay, Paris, in 34 min 7 sec, less than half the regular scheduled time and faster than a previous record set by a Spitfire. Six years later it was sold to Eagle Aviation and rebuilt as an ordinary Viking IB freighter, with Hercules engines, and put into service as Lord Dundonald on September 24, 1954.
Bill Gunston "The Illustrated Encyclopedia of Commercial Aircraft", 1980 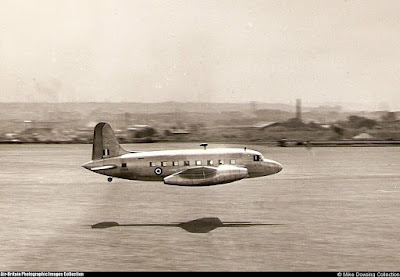 Posted by The Aviation Anorak at 18:51 No comments:

This one-off Vickers 663 Tay Viscount VX217 first flew 15th March 1950 It was used by the Ministry of Supply and then Boulton Paul for all types of air tests. It was scrapped in 1959. 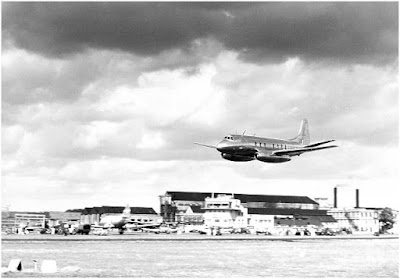 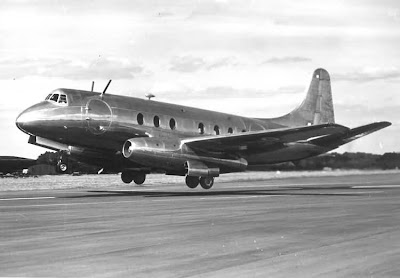 Posted by The Aviation Anorak at 18:14 No comments:

The Shorts SA.4 Sperrin was an experimental design designed to develop a strategic bomber. First flew on 10th August 1951, The aircraft had four Roll Royce Avon RA.2 engines mounted one above the other in two nacelles. The project was eventually cancelled with only two being built and both aircraft scrapped by 1958. it lost out in the end to the Valiant, Vulcan & Victor. Back in the days they build them first and see what happened! 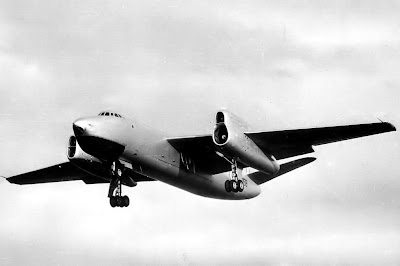 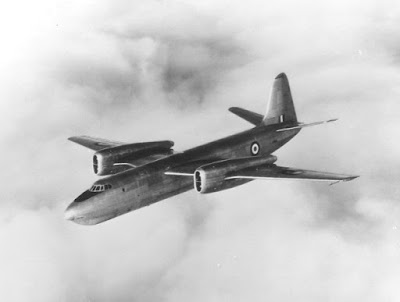 http://en.wikipedia.org/wiki/Short_Sperrin
Posted by The Aviation Anorak at 17:36 No comments:

I've got a Walrus in my pond! 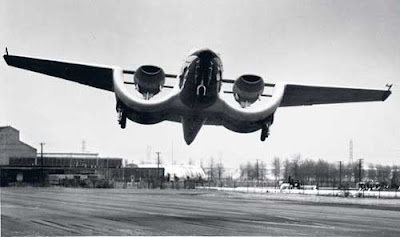 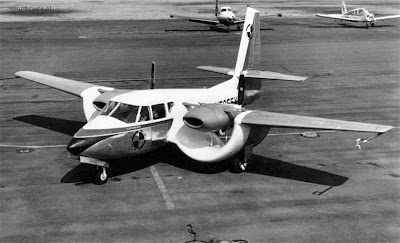 Posted by The Aviation Anorak at 18:59 No comments: