I have fond memories of the Blackburn Beverly from when I went inside one as a young teenager at RAF Hendon. This aircraft was sadly scrapped in 1981. I still remember being overwhelmed by the size of it plus the smell of it inside.The first flight was on the 20th June 1950 (then called the GAL60) this aircraft then evolved into what we know as the Beverly today. A total of 47 were made and only one aircraft survives today at Paull near Hull. They served the RAF well around the world from 1956-67 as a heavy load, short field, dropping aircraft

See more about this wonderful brute @: 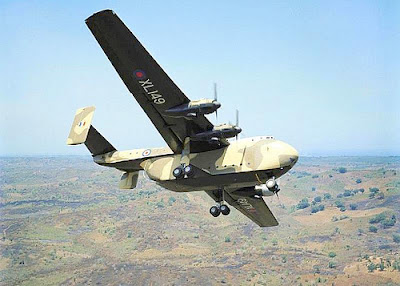 Posted by The Aviation Anorak at 19:19 No comments:

The Arado Ar 232 (German: "Millipede"), sometimes also called Tatzelwurm, was one of the first truly modern cargo aircraft, designed and built in small numbers by the German firm Arado Flugzeugwerke during World War II. The design introduced, or brought together, almost all of the features now considered to be "standard" in modern cargo transport aircraft designs, including a box-like fuselage slung beneath a high wing; a rear loading ramp (that had first appeared on the December 1939-flown Junkers Ju 90 V5 fifth prototype four-engined transport via its Trapoklappe); a high tail for easy access to the hold; and various features for operating from rough fields. Although the Luftwaffe was interested in replacing or supplementing its fleet of outdated Junkers Ju 52/3m transports, it had an abundance of types in production at the time and did not purchase large numbers of the Ar 232 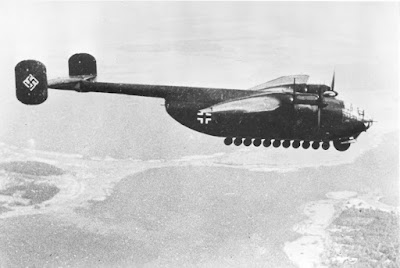 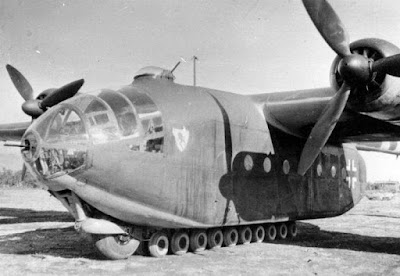 The Ar 232 design resulted from a tender offered by the Reichsluftfahrtministerium (German Air Ministry, RLM) in late 1939 for a replacement for the Ju 52/3m transport. Both Arado and Henschel were asked for rear-loading designs powered by two 1,193 kW (1,600 hp) BMW 801A/B radial engines, which was just entering prototype production and not currently used on any front-line designs. The Arado design beat out Henschel's after an examination of the plans, and an order for three prototypes was placed in 1940.

Wilhelm van Nes led the design of the Ar 232. He began at the cargo area, with a bay directly behind the "stepless cockpit" that was 6.6 m (21 ft 7¾ in) long, 2.3 m (7 ft 6½ in) wide and 2.0 m (6 ft 6¾ in) high. Typical designs of the era would use a side-mounted door for access, but the Ar 232 used hydraulically powered clamshell-doors on the rear of the bay with a ramp to allow cargo to be rolled into the hold. The tail control surfaces were mounted on the end of a long boom to keep the area behind the doors clear so trucks could drive right up to the ramp, much like the 1944-era American Fairchild C-82 Packet of a differing twin boom fuselage configuration. The high-set tail on its "pod-and-boom" configuration fuselage allowed the Ar 232 to be loaded and unloaded faster than other designs.

For short-field performance, the Ar 232 incorporated Arado's own "travelling flap" design for the entire rear surface of the wing. Even loaded to 16,000 kg (35,270 lb), it could take-off in 200 m (656 ft). This distance could be further reduced by using rocket assist (RATO) for take-off, and either parachutes or reverse RATO for landing.

The most noticeable feature of the Ar 232 was the landing gear. Normal operations from prepared runways used a tricycle gear, but the struts could "break", or kneel, after landing to place the fuselage closer to the ground and thereby reduce the ramp angle. An additional set of ten or eleven smaller, non-retractable twinned wheels per side supported the aircraft once the main landing gear's lever-action lower oleo-strut suspended arm - carrying the main gear's wheel/tire unit - was "broken", or could be used for additional support when landing on soft or rough airfields. The aircraft was intended to be capable of taxiing at low speeds on its row of small wheels, thus being able to negotiate small obstacles such as ditches up to 1.5 m (5 ft) in width. The appearance of the row of small wheels led to the nickname "millipede". In flight, the main legs fully retracted into the engine nacelles, while the fixed support wheels remained exposed and the nose wheel only semi-retracted.

Even before the prototypes were complete in 1941, the Focke-Wulf Fw 190 project had been earmarked to use the BMW 801A/B, and was proving to be a capable design. Production of the BMW 801 was insufficient to supply this new demand, and the Ar 232 was forced to use another engine. Eventually, the BMW Bramo 323 from the Junkers Ju 352 was selected instead, as it was already in production and could meet requirements if the Ar 232 really did replace the Ju 52/3m in service. The prototypes were far enough along that switching engines would have seriously delayed the program, so the first two were to be completed as the Ar 232A, and the third and a newly ordered fourth as the Ar 232B. The third and fourth prototypes (and all production aircraft) used four engines (in place of the two specified in the RLM specification) in order to provide the desired performance.


The first two prototypes, bearing the Stammkennzeichen alphabetic codes GH+GN and VD+YA respectively, started trials in early 1941. The first flight resulted in the collapse of the nose gear, but the millipede wheels saved the aircraft from damage. A further ten pre-production machines were built, and were used operationally as the Ar 232A-0 while awaiting production versions. In general, the Ar 232 completely outperformed the Ju 52/3m. It carried roughly double the load over longer distances, operated from shorter runways and rougher fields if need be, and cruised about 70 km/h (44 mph) faster.

The Ar 232B program ran at the same time. With four 895 kW (1,200 hp) Bramo 323s, power increased from 2,386 kW (3,200 hp) to 3,580 kW (4,800 hp), solving the A model's problem of having little excess power in case of engine failure. This change also required the wing to be extended slightly, the span increasing just over 3 m (9 ft 10 in) in total. The extra weight of the engines also moved the center of gravity forward, which was offset by extending the cargo area rearward another meter.

Two four-engined prototypes were ordered, the V3 and V4, and V3 first flew in May 1942. A further 10 were then ordered as the Ar 232B-0, and were used widely in an operational role. However, this was the only order for the design, as the Luftwaffe gave transport aircraft production a very low priority. Many of those produced were used by Arado to transport aircraft parts between its factories, and did not see front-line service.

Plans were also made to replace the outer wing sections and control surfaces with wooden versions to conserve aluminium. Originally to be known as the Ar 232C, the design dragged on and was later renamed the Ar 432. Plans were finally put into place to start production in October 1945, but the war ended without even a prototype being produced. Two even larger planned versions, the Ar 532 and the Ar 632, would have almost doubled the wingspan to 60 m (196 ft 10 in) and added another two engines.

Two of the B-0s were captured by British forces at the end of the war. After test flights by Eric "Winkle" Brown, who gave the design excellent marks, they were used by the Royal Air Force on flights between England and Germany after the war.

From Wikipedia
Posted by The Aviation Anorak at 17:02 No comments: