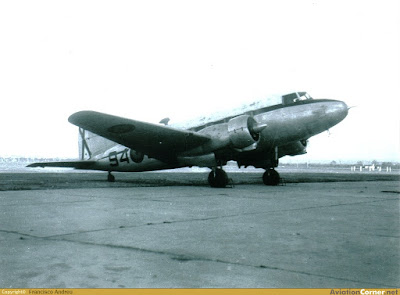 The C-201 was the result of an agreement between the Spanish government and manufacturer CASA to develop a transport aircraft for the military capable of carrying a payload of one tonne over a range of 1,000 km (620 miles). The design was a twin-engine low-wing cantilever monoplane of conventional configuration. The main units of the tailwheel undercarriage retracted into the engine nacelles, the aircraft looking somewhat like a scaled-down DC-3.
Two prototypes were constructed, the first of these taking to the air on 11 February 1949. An order for twelve pre-production aircraft and one hundred series aircraft was soon forthcoming. The pre-production machines were to demonstrate a range of different equipment fits for the airframe, enabling it for a variety of roles including personnel transport, training for bombing and photo-reconnaissance work, and instrument flying training. A number of engines were also to be evaluated, including the Armstrong Siddeley Cheetah that had powered the prototypes, the Pratt & Whitney R-1340, and the locally-produced ENMASA Sirio.
Eventually, it was the supply of powerplants and propellers that doomed the Alcotán. Spain's domestic engine industry was simply incapable of producing powerplants in sufficient quantity for the project, and Spain was unable to afford to import foreign engines. While the entire production run had been scheduled to be completed before 1955, the shortage of engines meant that by 1956, only eleven complete aircraft had been delivered, all that would ever be finished. In 1962, the project was finally cancelled without the engine problem ever having been resolved. By now, CASA had 96 complete airframes in storage awaiting powerplants. These were scrapped, the Spanish government compensating the manufacturer for the debacle. 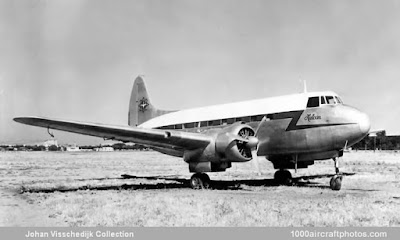 The C-202 was designed for use on Spain's international air routes. It has a tricycle landing gear and had a heated/air-conditioned cabin which could accommodate 14 passengers. Twenty aircraft were initially ordered, and delivered to the Spanish Air Force with the designation T.6. 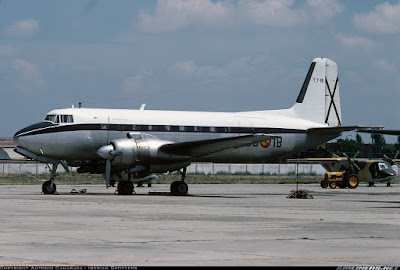 The  C-207 was a scaled-up version of the CASA C-202 Halcón and was designed for the domestic civil market. The C-207 received no civil orders, but the Spanish Air Force ordered 10. The first model, designated T.7A entered service in 1960. Ten more aircraft were ordered and configured for paratroop or cargo transport, designated CASA 207C(T.7B).
The two prototypes and 20 production aircraft served in the military until the 1980s.
Wikipedia

http://www.airliners.net/search/photo.search?aircraftsearch=CASA%20C-207C%20Azor&distinct_entry=true
Posted by The Aviation Anorak at 15:53